This summer, we’re going on vacation with you!

Do you remember them? We presented them to you during a Masterclass organized at La Conciergerie in Nantes this winter. As a reminder, Côquetelers is an independent bottler created by two epicurean friends with a passion for good times with friends and spirits who have travelled 12 countries and over 15,000 km to meet more than 100 distillers, coopers, merchants and barmen.

Air Côquetelers is a tailor-made service for holidays with friends or family.

The principle is simple: you enjoy your holidays after all your hard work at the office and we agree, you’ve earned it! That’s why, La French svp is proud to partner with Côquetelers to simplify your life right down to the lemon slice of your aperitif!

And now, you’re wondering how to order?

1- go to the Air Côquetelers page

2- fill in the questionnaire

4- payment by bank transfer if you accept the quotation

6- revolutionize your aperitifs and impress your friends and family!

To sum up, Air Côquetelers is the end of the drudgery of the grocery shopping and the morose arrival of the first evening without festivities on holidays, unique spirits with simple recipes, a wide choice of bottles to please everyone!

We exclusively offer you our favorite recipe with the Liqueur de Sapin:

So where are we going?

While waiting for the bars to reopen... we toast with old-fashioned drinks. 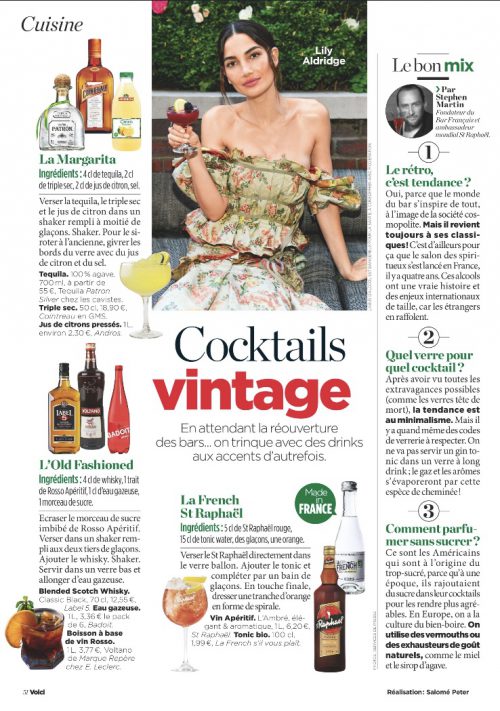 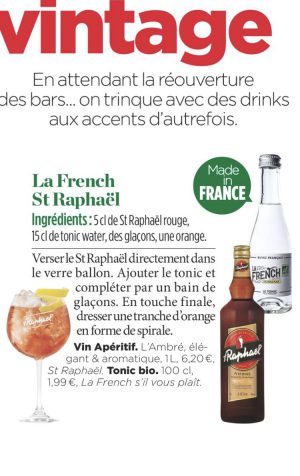 (Re)discover the St Raphaël, a completely forgotten 100% French alcohol which is drunk chilled in the summer to change from the traditional Spritz.

Here is our special recipe, elaborated by Stephen Martin, the world reference of the French cocktail:

Realization :
Pour the St Raphael directly into the balloon glass.
Add the tonic and complete with an ice bath.
As a final touch, arrange a spiral-shaped slice of orange.

Also find all the tips from Stephen Martin, to become a pro of 100% French cocktails!

Good tasting to all and DRINK FRENCH!

Back on the Masterclass held in Nantes by Coquetelers, an 100% French independent bottler.

Discover Coquetelers, a new brand which is part of the “apéritif à la française” universe. 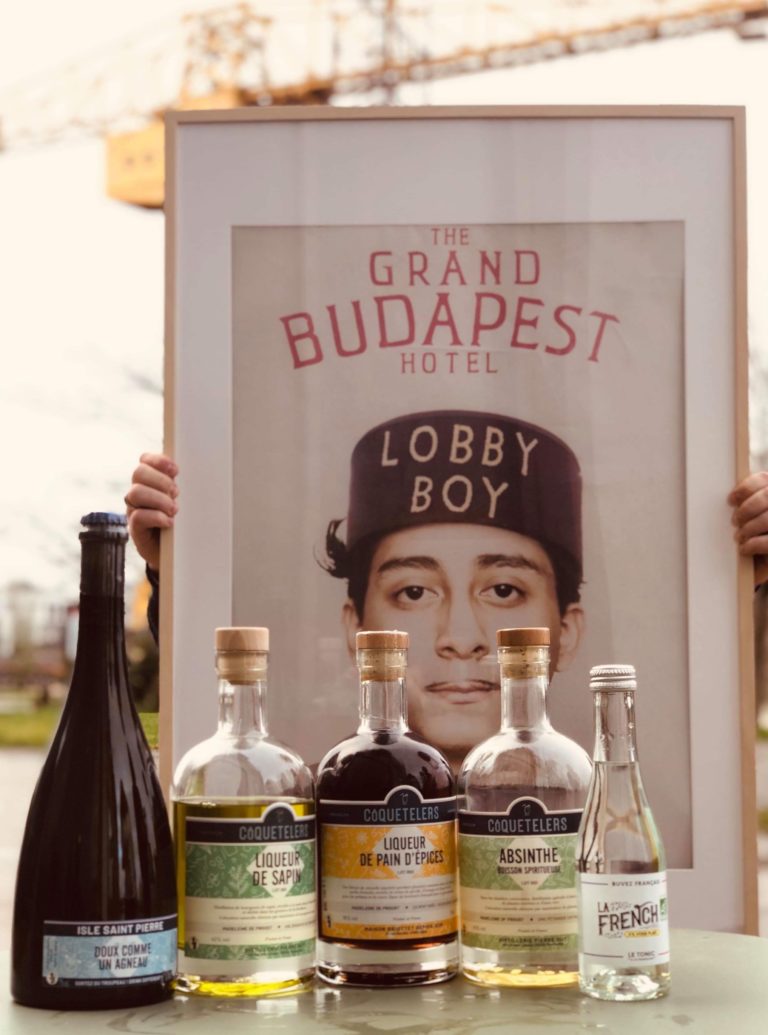 The Côquetelers brand was founded by a pair of long-time friends: Timothée, who comes from a merger-acquisition background, and Matthieu, who grew up in the middle of the vineyards in a family of winegrowers.

After having made their own experiences, they got together and launched themselves into the somewhat crazy project of this tour of Europe, and today of the Côquetelers.

A beautiful story that has given birth to beautiful products:

The French please has a real crush for the Liqueur de Sapin, ideal with our Tonic for a 100% French cocktail!

Find soon our special recipe in the tab “Our Cocktails”.

Côquetelers presented its products in partnership with La French s’il vous plaît during a Masterclass at La Conciergerie in Nantes.

Organized by Mother Shaker, a fun and professional concept, focused on the better drinking, this event took place at La Conciergerie, a bar located near the “Hangar à Bananes” in Nantes.

On the program, presentation of the Côquetelers brand and product tasting with La French SVP.

Something to delight all the guests! 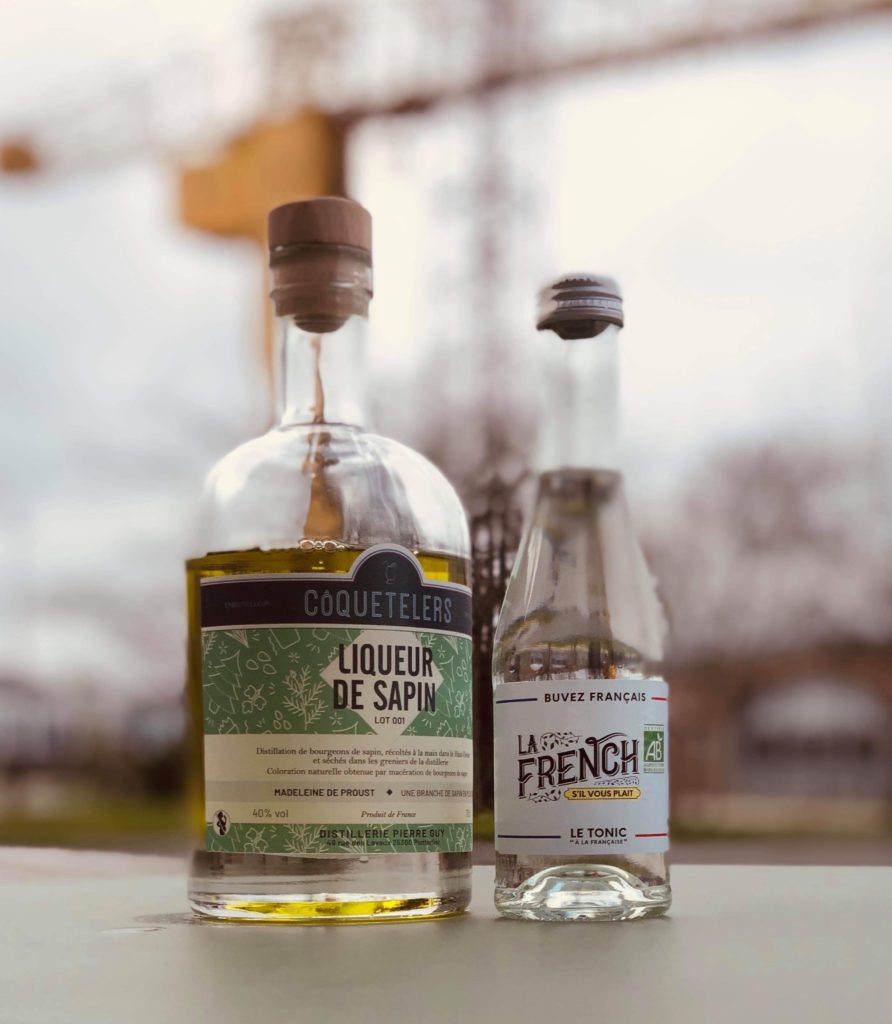 So, ready to taste?

to discover other delicious cocktail recipes!

With its recipe using “detox” ingredients, the Moscow Mule is the new Mojito!
Discover how to make this cocktail with La French s’il vous plaît… à la Française! 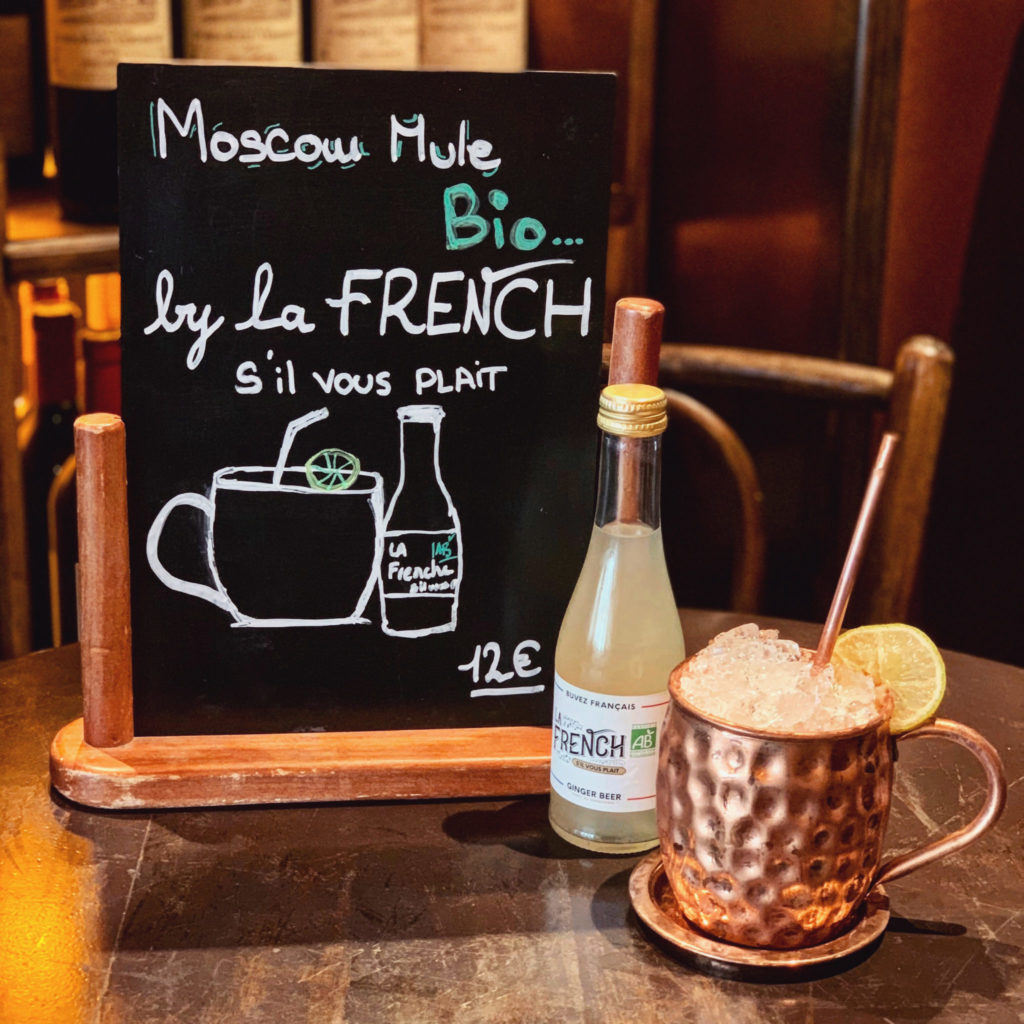 The Moscow Mule is a cocktail based on vodka, ginger beer, lime juice and accompanied by a slice of lemon.

It is traditionally served in a copper cup, however this is preferably made of another metal in contact with the liquid, because of the too acidic pH of the drink.

Discover the originale recipe of the Moscow Mule :

Does that tempt you? Find right after our 100% French and organic recipe!

Super easy to make, it will become the ally of all your aperitifs for successful evenings with your friends!

La French s’il vous plaît, expert of the French cocktail, offers you a recipe of a 100% frenchy and organic Moscow Mule!

For an optimal result, visual and tasty, serve your cocktail in copper cups! You’ll see it changes everything!

So now, to your shakers and enjoy!

to discover other delicious cocktail recipes!

An ephemeral themed restaurant created by students of the Paul Bocuse Institute has opened its doors in Lyon: Ephemera Restaurant. 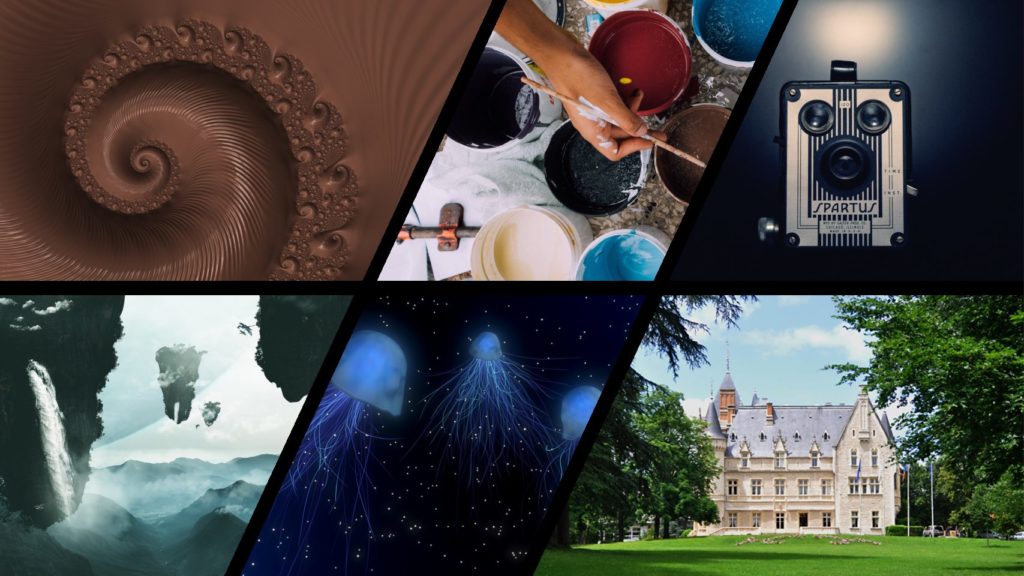 No more classic restaurants without adventure, come and live a unique experience!

For the moment in Lyon and from February 2020, we will create a succession of ephemeral restaurants on bewitching themes.

From the choice of the theme to the selection of a menu and an enchanting decoration, our team of young enthusiasts is preparing a customized event that will disconnect you from your everyday life!

A tempting desire to discover the theme? The menu?

It’s all in their “The restaurant of the moment” section.

Enter the world of Charlie and the Chocolate Factory and let your senses carry you away.

From decor, menu, drinks, serving techniques to tableware, this moment spent at the Chocolate Factory will disconnect you from your real life and take you back to your childhood.

Discover the gourmet menu (from February 7 to 23):

All accompanied by delicious cocktails with La French svp of course ! 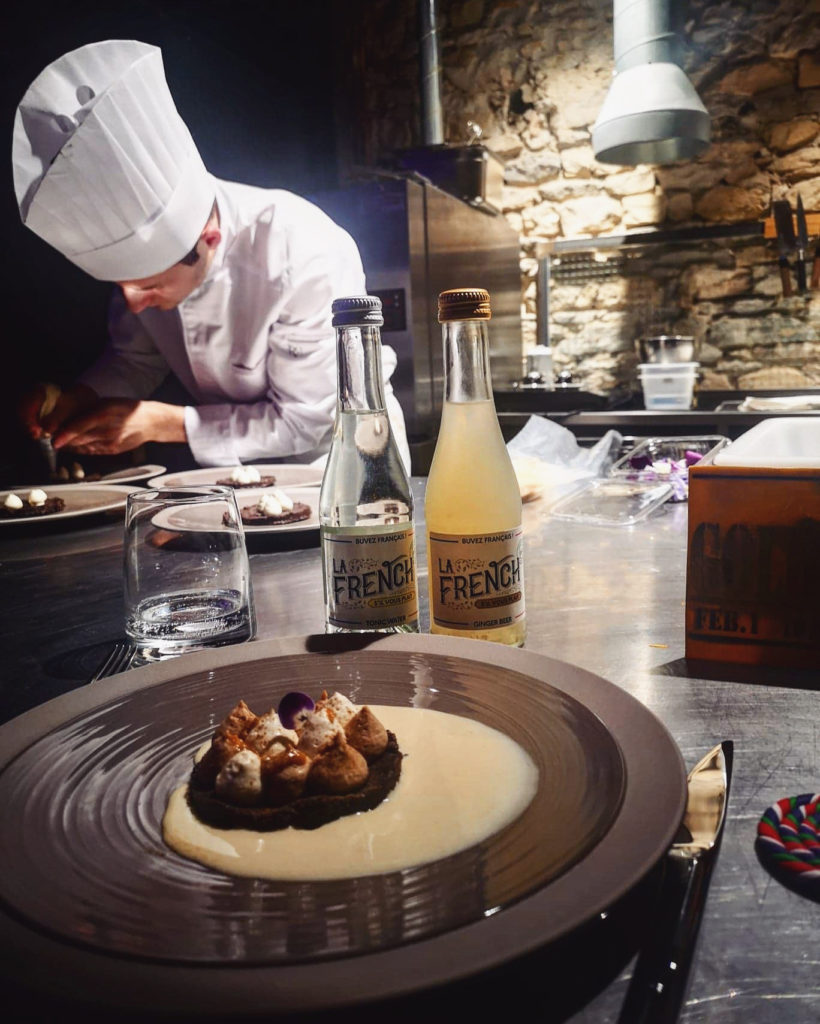 “The Chocolate Factory” at Ephemera Restaurant
From February 7 to 23

You couldn’t miss it, it’s EVERYWHERE at the moment… Gin Tonic is the ultra fashionable cocktail! Classic or revisited recipes, it is now the star of the bars and the customers are tearing it off!

Gin Tonic is an alcoholic cocktail based on gin and tonic water, sometimes accompanied by a slice of lemon or lime and served with ice.

Today, the recipe for Gin and Tonic is available in all sorts of ways for the greatest pleasure of bartenders and connoisseurs alike!

We’re not going to lie to you, it’s one of the simplest cocktails to make, but thanks to this recipe, you’ll become an expert in the world of aperitifs! And it is your friends who will thank you!

La French svp, expert of the French cocktail, proposes you a recipe of a 100% frenchy and organic Gin and Tonic!

Don’t hesitate to add your own personal touch like a little sprig of thyme or coriander or even add a few pink peppercorns. Trust us, your cocktail will always be excellent!
So, who’s going to go for it?

Personally, our mouths are already watering… and since it’s Friday… we wish you a wonderful weekend and cheers!

A few days ago, La French s’il vous plaît invited itself during a seminar to present its products through a tasting workshop. 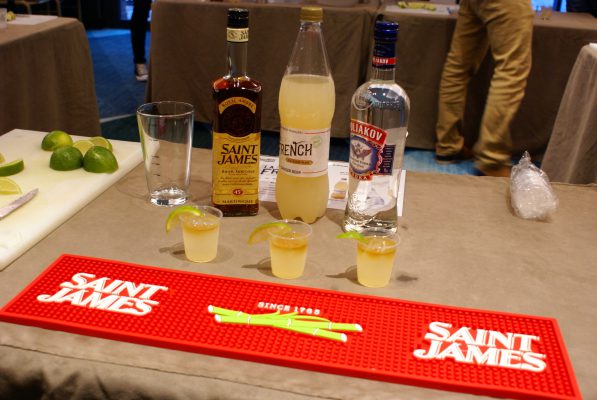 Guests were able to discover the 100% French organic Tonic and Ginger Beer from La French s’il vous plaît
through the history of the brand and a soft tasting. 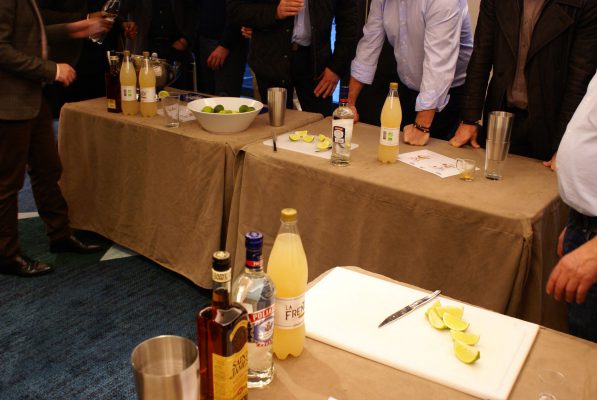 Then we offered them the opportunity to test themselves in the art of cocktail making by creating simple and trendy recipes!

We selected the Gin Tonic with Gibsons gin, the Moscow Mule with Poliakov vodka and the Dark and Stormy with St James rum.

Intense concentration for our guests during the workshop before the tasting… who are now real experts for a successful aperitif!

Would you also like to become a master in the art of cocktails?
Here are our recipes that are ultra simple to make, extremely trendy and above all really delicious!

to be made directly in the glass

So, to your shakers, get set, shake !

Totally unknown just a few years ago, this drink is now the star of the bars! Recommended for its benefits and adored for its spicy taste, it can be enjoyed on its own as well as in cocktails! As you may have gathered, Ginger Beer is THE drink of the moment! But where does it come from? 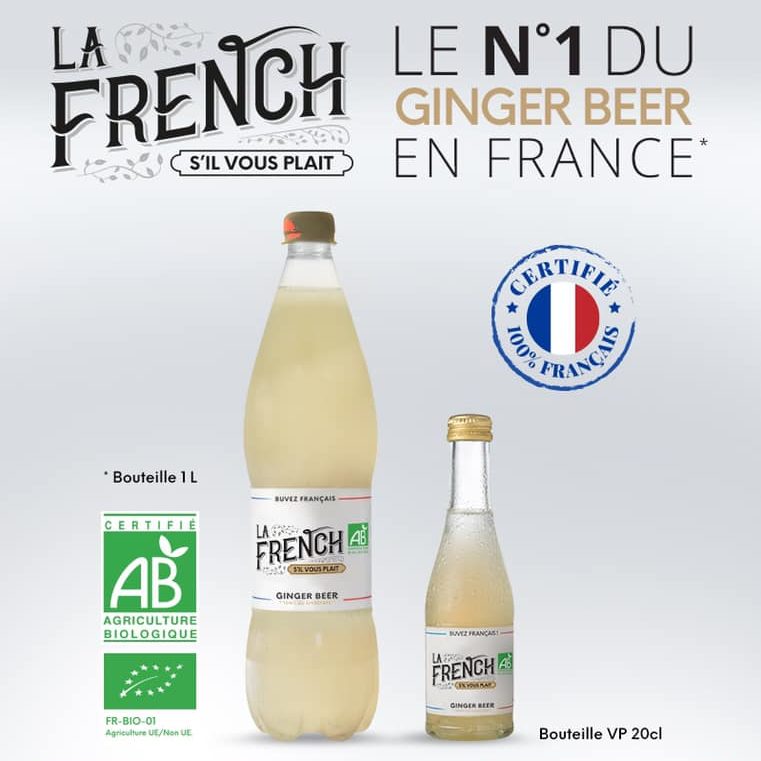 A little bit of culture… discover Ginger beer: from its origins to today!

Ginger beer is a soft, non-alcoholic, carbonated beverage that originated in Jamaica.

As its name does not indicate, it is not beer but a fermented, non-alcoholic drink made from ginger, water and sugar. It is obtained by bottling a liquid based on fresh ginger when molasses fermentation begins using baker’s yeast. Not to be confused with ginger ale, a kind of lemonade (soda) flavoured with ginger, but sweeter and less ginger-flavoured than ginger beer.

Ginger beer, originally an alcoholic beverage, was first brewed in Yorkshire in the 1700s before becoming very popular in Britain and North America; by 1935 there were 3,000 breweries in Britain, 300 in the United States (where it was affected by the Prohibition Act) and 1,000 in Canada.

Usually sold as a non-alcoholic soda, today Ginger Beer is everywhere. With the French craze for non-alcoholic cocktails and mocktails, this drink is also widely used as part of cocktail recipes, as ginger has the characteristic of enhancing the taste values of alcoholic drinks.

La French s’il vous plaît has seized the opportunity of this market and is today the French leader of this drink. With its organic recipe, 100% French and low sugar level, you can find Ginger Beer in 20cl and 1L formats from our suppliers and at our partner cafés, hotels and restaurants.

to discover many cocktail recipes based on Ginger Beer!

Do you know the new aperitif concept at Calibré Huitrerie? 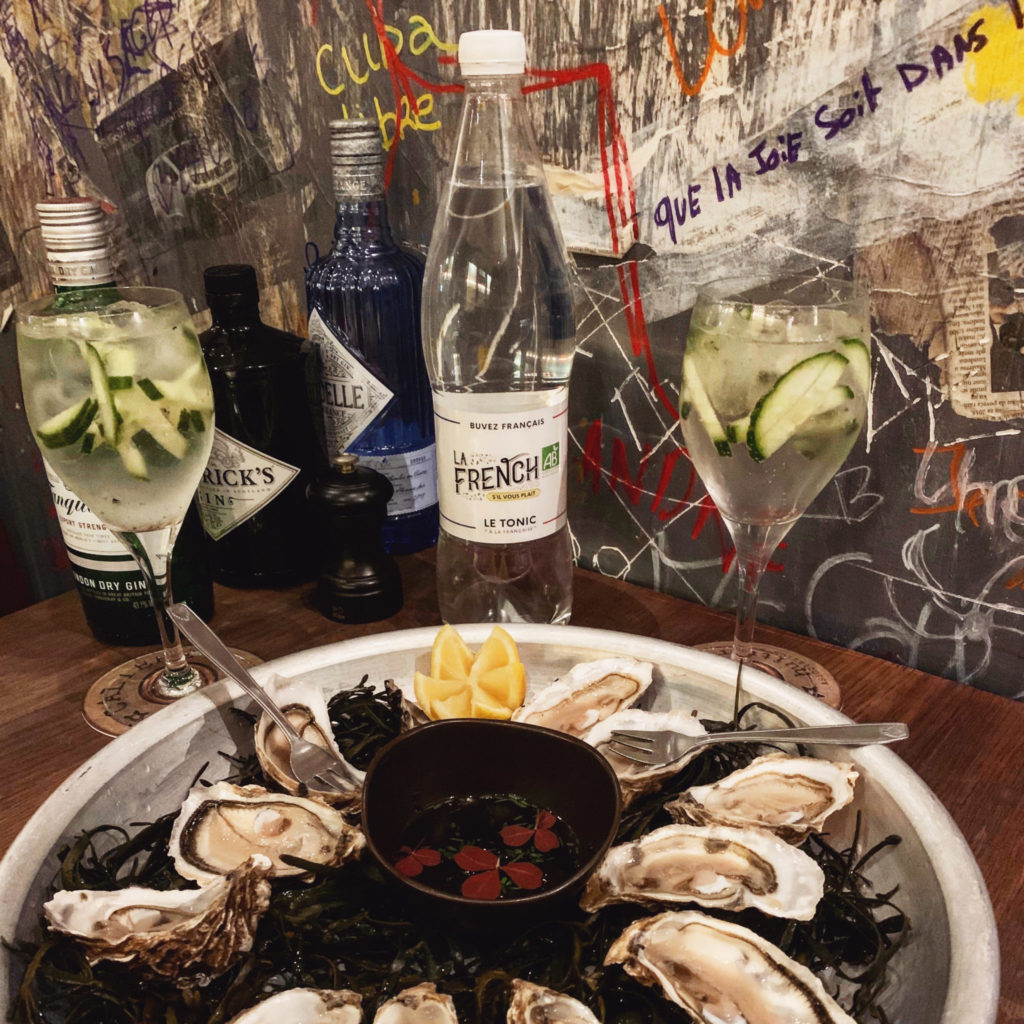 La French s’il vous plaît partners with the restaurant Calibré Huitrerie located in the 10th arrondissement of Paris to offer you a great aperitif concept!

On Saturdays and Sundays, taste a dozen N°4 oysters and two Gin Tonic with La French s’il vous plaît for only 30€.

Warm welcome and great atmosphere, in addition to eating well, you will have a great time! So don’t hesitate! Come and enjoy delicious fresh products and especially Breton oysters to fall down!

Still not convinced? This Sunday, January 19th, come with family or friends and challenge each other at the karaohuitre starting at 4pm!

What a good news for the beginning of the year! Another good reason not to spend the weekend on the couch!

with many French-style aperitifs! 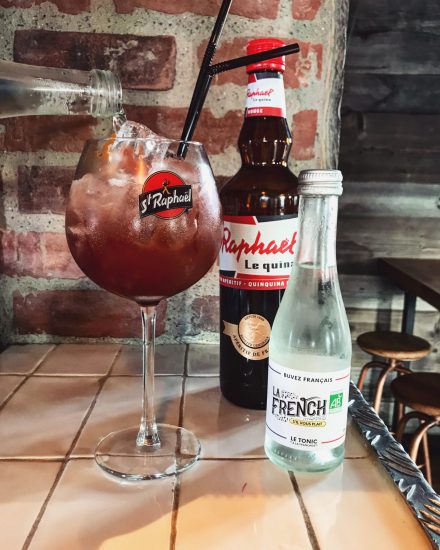 A revisited Spritz with St Raphael, a Gin Tonic with the organic Generous Gin, a Moscow Mule with the Grey Goose vodka, a Dark and Stormy with the Kraken, there’s something for every taste in cocktails! And with French liquor… what more could you ask for?

Finally, a good reason to have a lot of aperitifs!

And for those of you who are new to Dry January, Tonic and Ginger Beer will become your best allies in creating delicious non-alcoholic cocktails!

So in 2020, let’s treat ourselves with La French s’il vous plait, your 100% French organic products.